Why we love cinnamon

We’ve all probably got that little jar of cinnamon powder tucked away in our cupboards – for all those Christmas biscuits and cakes – but did you know that cinnamon offers amazing benefits all year round? While the flavour is great for the chillier part of the year, its properties work wonders from spring, right through to winter, so why not starting embracing the scent of cinnamon today?

You may have thought there was only one type of cinnamon, but there are actually hundreds. Ceylon cinnamon, otherwise known as true cinnamon, or cinnamomum zeylanicum, is perhaps one of the most popular varieties and one you’re most probably used to. Ceylon cinnamon comes from the crumbly inner bark of the cinnamomum zeylanicum tree, and its flavour is sweet and delicate. It’s an absolute must for fine desserts and has an advantage over all other types of cinnamon in that it has ultra low levels of coumarin – meaning it’s safe to enjoy in large quantities.

While cinnamon offers lots of benefits, here are a few of our favourites:

The best remedy for a horrible stomach bug is cinnamon – due to its powerful anti-bacterial properties. Cinnamon has also been used to provide relief when faced with the onset of a cold or flu, especially when mixed in a tea with some fresh ginger.

Research has shown Cinnamon is one of the most effective substances against E-coli, Salmonella and Campylobacteria – so start sprinkling it on your porridge, yoghurts and sweet potato fries today!

There’s something about cinnamon that’s warming and comforting. It can turn an all-year round dish into something autumnal that gives our insides a big hug. What’s more, its rich, intense aroma makes our homes smell pretty good too – a lot more appealing that those usual lingering food smells!

Research has shown that cinnamon may keep you more alert and decrease your frustration. With the days feeling grey and more overcast, getting the motivation to get on with work and remain alert throughout the day can be difficult. But perhaps a whiff of cinnamon will perk up your day and boost your brain function…

If you’d like to soak up the amazing benefits of cinnamon this autumn and winter, why not purchase one of our cinnamon infused scented candles?

Aubergine Scented Candles, a warm, full and floral scent, infuses cinnamon with florals such as rose, for a delightful mulled wine-inspired scent. The ingredient list also includes Melt favourites, such as amber, cedar, musk, chamomile and bergamot to name a few! 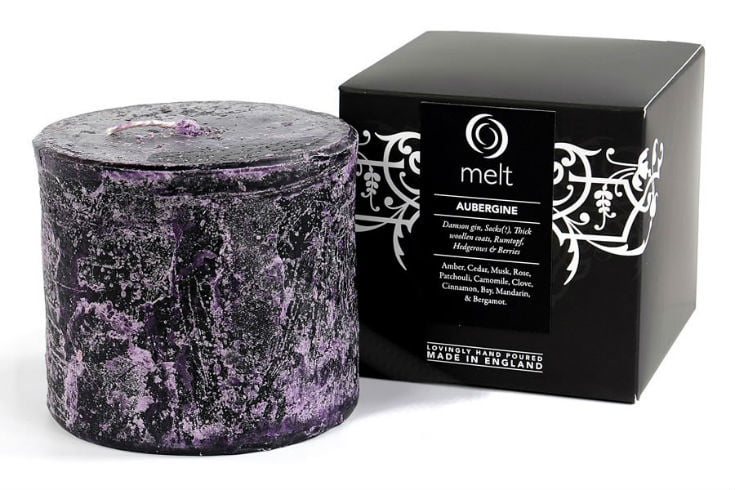 When we designed our Autumn scent, we knew there was one ingredient that had to be included – cinnamon. Spicy and warm, this scent embodies all there is to love about the season and also includes clove, moreish nutmeg, zesty orange and spice, and delightful vanilla. Mmm!

What do you love most about cinnamon? Whether you love the smell of baked cinnamon buns, or you’ve been getting all the health benefits of cinnamon with a sprinkle of it in your porridge, we’d love to know! Tell us in the comments below or tweet us @MeltCandles

Stay in the loop

For the latest discounts, product launches and more sign up to our newsletter - we promise to only send lovely stuff to your inbox!